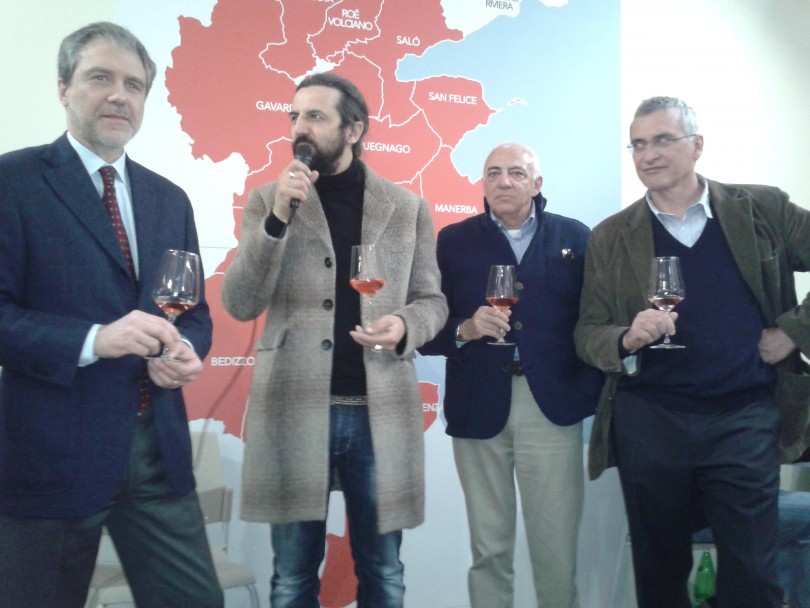 “Italia in Rosa”, the international showcase for rosè wine of Moniga del Garda, has been launched in Vinitaly: the event will come back under the sign of so much news, as the location change. In fact the eighth edition will take place in the ancient fourteenth century castle of Moniga del Garda, the city of  Chiaretto where the event was born and raised over the years to become an event of national character. This is the most important news made official at Vinitaly at the stand of the Consortium Valtènesi, where president Alessandro Luzzago has hosted the press conference along with Luigi Alberti, president of Italia in Rosa. During the meeting, the president also presented the new director of the Consortium Carlo Alberto Panont, well-known figure in the world of Italian wine, who has worked with many major national institutions and has now agreed to make his experience available also for the great challenge of Valtènesi.

Special guest of the introduction has been the singer Omar Pedrini, recently chosen as the testimonial for the Expo 2015 Unesco heritage of Brescia. The singer-songwriter, a great friend of Chiaretto, has taken a break in his new electric tour rehearsals just to be in Verona to testify his passion and dedication to the rose wine of Valtènesi. “It ‘a wine that I love as it belongs to the great tradition of the land that gave the origins to my family – said the musician -. I think it is also a very modern produtc, and are happy to support the Consortium Valtènesi in this important and intelligent promotional action.”

Pedrini will probably be among the protagonists of “Italia in Rosa 2015” which, as explained by Luigi Alberti, “will take place in the Moniga castle, typical defensive construction of the area dating back to the period between the fourteenth and fifteenth century, and will host more than 100 wineries not only from Garda but also the most important regions of Italy. ” The old headquarter of the villa Bertanzi will not be abandoned, however, because this year it will host the tastings fot journalists and specialized operators.

“Italia in Rosa is our most important showcase – said President of Valtènesi Alessandro Luzzago -. This year it will also represent a fundamental step to consolidate a path that has seen our Doc register a 30% growth and a strong international prestige in Prowein Dusseldorf, where last week we participated for the first time as the Consortium ” .