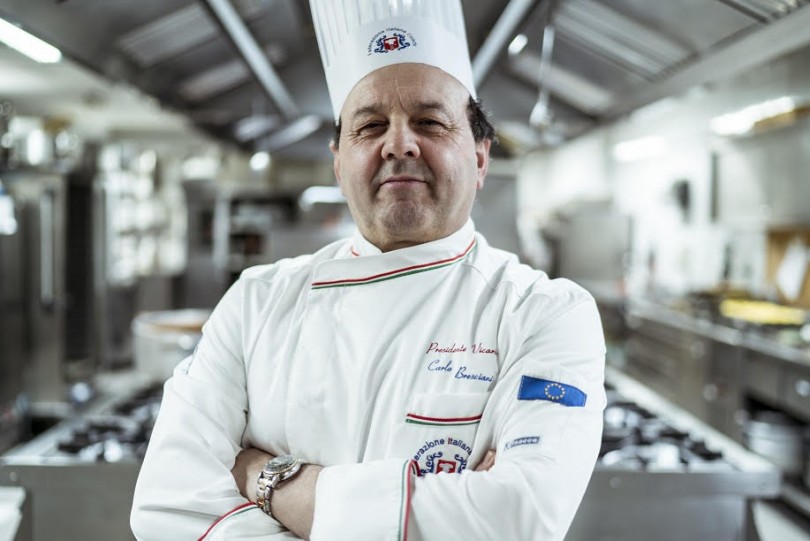 Solidity, technique, experience, with the right pinch of visionary creativity needed to continually refresh your cuisine: Carlo Bresciani, one of the top and most known cooks on the Lake Garda scene, is a professional who loves concreteness while experiencing his craft as a daily challenge. “If you always eat the same things in a restaurant, you lose the poetry of a beautiful night out” says the chef, class 1958, originally from Gavardo, vicar president of the Italian Cooks Federation, since 2004 at the command of the Antica Cascina San Zago restaurant in Salò. The last landing of a long career ideally started long ago when he was still at school “They took us on a ride to Villa Alba, which then hosted the Gardone Riviera hotel school, and offered us a slice of plumcake, something I never saw or tasted in my life: I immediately realized that that was to be my school, and I enrolled in 1972 in the school year in which the Caterina De Medici Institute debuted in the new home. ”
After only one year of study, Bresciani had already been selected by his cooking professor, who took him with him in his brigade for the summer season at the Grand Hotel of Molveno. “At that time, it was common practice for cooking students to work: rest zero, little money, but it was a great school of life.” He has from then on crossed many kitchens in the big Garda hotels, in the summer seasons and after the end of the school, before starting his first experience as a restaurant owner in 1981 with the Caligola in Gavardo: an adventure lasting eight years before a return to the seasonal circuit that opened a new chapter in Bresciani’s life. “I ended up at the Grand Hotel Villa d’Este in Cernobbio on Lake Como, a luxury five-star hotel that in 1989 was considered the best hotel in Italy: finding myself in a brass band of forty chefs was a great leap of quality that gave an extraordinary boost to my professional training.” From here to the Villa Cortine in Sirmione, another five stars where Bresciani has been executive chef for ten years. But the dream of an adventure on its own was still lurking: and in 2004 it materialized with the opportunity to open a new restaurant in a historic, abandoned 1540 farmhouse abandoned on a hill overlooking the Salò gulf, in via dei Colli . Thus, after a patient renovation work carried out along with the property, on May 21, 2004, the Ancient Cascina San Zago, was born;: a 2500 sqyuare meter structure that can accommodate up to 500 people. A fascinating but challenging location, with a core business in banqueting, due to the dimensions, but which over time has been able to conquer a dedicated clientele with a gourmet restaurant for a few, completely separate from the event area to avoid crossing the two types of customers, with service in the court in summer court and in three dedicated rooms in winter. And it’s here, in the “à la carte” dimension, that the imagination of Carlo Bresciani is unleashed, working in particular on the local tradition. 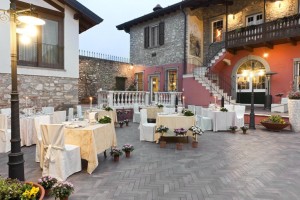 “One of my great passions is the use of  raw materials of our territories, starting from lake fish to the extra virgin olive oil, which in my work is fundamental – he explains. The valorization of these elements is the basis of my kitchen, which I define contemporary but with the traditional flavor, without any extremism that I do not love and I have never loved. ”
From this attitude, backed by impeccable technique but also from a delicate and refined hand, some authentic Cascina flag dishes were born, such as the Risotto with Bagoss ice cream, based on one of the country’s dairy jewels, Ravioli stuffed with oil, Honey and spice lacquered steak heart and the mythical Persian Fish in Tempura, caught in the Gargnano waters and treated with the classic cooking technique learned by Carlo in his many trips to the Far Eaest: a contemporary and completely revolutionized version of a classic Garda  “street food”. “Since 1995 I’ve been in Japan for 21 times to conduct  Italian cooking courses for Japanese chefs, but at the same time I was attracted to their techniques, which I tried to learn and then use in my work.”
Also appealing is the Rabbit Salad, vegetables and extra virgin olive oil, served in a jar (the dish with which Bresciani has managed 20 days in Coldiretti’s Expo 2015 restaurant). And among the new entries you can not miss the aubergine Rolled Coregone on a pumpkin flowers cream: a really delightful combination at the middle of the road from lake and land, with great delicacy and balance, also recently served at the official gala dinner of the tenth edition of Itala in Rose in perfect match with the Valtenesi Chiaretti.
In the Cascina kitchesn Carlo works with a seven-chef’s brigade, including his son Alberto, who follows pastry and bakery: the cellar is contained in a hundred labels, and also here the territory, above all the Garda more than the nearby Franciacorta, is the number one option. The average bill? 55-60 euros excluding the wines, definitely well spent. The Cascina is also open for lunch, closed on Monday night and Tuesday, and only three days a year, from January 1st to January 3rd, to run a vast banqueting and catering business in which, says Bresciani, ” we try to transfer the same restaurant quality to the dish through a great work of organization. ”
But has this veteran of a thousand kitchens, ever pursued the goal of the Michelin Star? “At my age I believe the Stars are now gone! – concludes -. And this is certainly not the right location. I prefer to leave this hope to some of the young colleagues in Garda that I really like: like Saulo della CValle of the Moniga H20 Osteria. Or like the Leali Brothers at Casa Leali in Puegnago: very modern and steadily growing. I expect a great future for them. “